But if you want to read Odin gush and get all shiny eyed about a fantastic Cyberpunk game, cheers!

For starters, I am COMPLETELY OBSESSED with System Shock 2 from Looking Glass studios (let’s be honest, I am obsessed with pretty much EVERYTHING made by Looking Glass Studios) and years ago I had decided to track down the original game.

The first game was created in ’94, when my gaming addiction was blossoming. I managed to find a copy in a vintage gaming shop (bigass box, manual, and all), and have no regrets purchasing it even though I have no idea how I thought I would be able to get it working…

Much to my relief, Good Old Games carried the original System Shock, along with other delightful treats that I remembered myself being addicted to. (Wing Commander FTW, FreeSpace: you imagination fueling tart)

I loaded it up….and found the retro Doom-like controls to be a difficult obstacle for me.

So I did what any lazy individual would do…and looked up a Let’s Play on YouTube. And it was satisfying enough for me, because I certainly did not have the patience to play it myself, and I got to learn the story.

WAS THAT NOT DELIGHTFUL??????
With that tease, NightDive Studios have also established a Kickstarter Campaign that has nearly reached funding ten days in. And with that a free Pre-Alpha demo available on three platforms: Steam, Good old Games, and The Humble Store.

And of course I needed to grab it. And play it. And….yes.

So before I get into my impressions, I want to iterate that this is a Pre-Alpha demo. For those of you not familiar with the lingo, simply means that it is in no way an accurate reflection of what the final game will look like, just what it *currently* looks like. And there are a lot of things that will be broken since it is so early in the development cycle.

Speaking of broken, I actually had a few issues with BOTH demos. I first tried the Steam version because it was convenient. But it wouldn’t even install on my machine. It was also during the sacred holiday of Steam Summer Sale, so the servers constantly taking a massive shit on everything probably didn’t help with that scenario.

So like a cyber addicted junkie, I looked elsewhere for my fix. I downloaded the GoG version, but after a few minutes of gameplay, it crashed. Like my hopes and dreams. What else is new?

Since I didn’t know about the Humble store version because apparently I don’t read things, I wiped the tears and snot from my face and tried the Steam version again. This time, I managed to get that one working….somehow.

So first overwhelming impressions, it looks exactly like what the game would look like if it had been made today. They even have the original voice actor for SHODAN doing new voice overs. In fact, it is my understanding that they have a good chunk of the original team working on this project, including the artist that designed the aesthetic in the first place.

IT’S.SO.BEAUTIFUL.
You are thrown in, exactly like you were back in the original game. Grab your stick, and get whackin’
And the music score is delightful:

It has more of a BioShock feel (which is also and IP owned by the original creator of System Shock) Rather than a retro 80’s Cyberpunk, but I think it adds more to the immersion of the environment.

While this does reflect a modern resurrection of a fantabulous game, I am wondering what the entire objective is going to be on the project. As it seems right now, it looks like the project is intended to be simply remake the game in modern tech. Which is great, but I personally don’t know how I feel if I am going through a game where I know all of the puzzles ahead of time, or the amount of enemy respawns in a level. The kickstarter does mention getting the younger gamer generation interested in it, so the content would essentially be a surprise for them. I am certainly going to buy it and play it no matter what because…reasons.

The inventory system is a wonderfully retro space management system which was always a bane of my existence:

I am also wondering what the full UI is intended to look like. Back when this was made, any buttons or puzzles blended in with the rest of the environment, so  you could easily miss something important.

I have also found myself stuck at the circuit puzzle since modern games often highlight important objects. All I knew was that the game was telling me “the circuit needed power.”

There was a set of brackets around the entire circuit, and it took ten minutes of me running around the map going “okay, where IS the power source” for me to figure out that I can actually press the buttons on the pane. So I have a feeling that it is just a matter of re-learning how the game works. 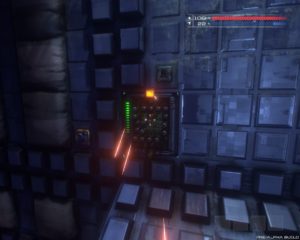 However, if I was a SMART individual, I would have realized that the KEYPAD in the room BEHIND ME, you know THE ONE I HAD TO OPEN IN ORDER TO GET HERE IN THE FIRST PLACE, works the same way:

The lighting is incredibly dynamic. From screens illuminating the rooms to even light switches that have sound triggers attached to them. It just feels so….well…cyber. The brightness of the colors plastered with blood and gore to make sure you know “hey, some shit went down here.”

I will admit the light switches do confuse me a little, and I do not know if there is a stealth mechanic planned for the game. Otherwise, why would you have the lights off?

That being said, I don’t know if they intend on making a brightness setting in the options menu in the future, because there were times when I couldn’t see shit and repair bots nibbled my ankles. That did not make my day.

And I LOVE the glitchy damage effects….made me die a few times just to trigger it, but hey FOR SCIENCE!

For controls, they intend to develop controller compatibility, which will be an interesting addition.

I don’t have too much else to say about it that would coherently come out of my mouth other than LADDER MECHANICS OMFG SO WONDERFUL. Delicious smooth ladder mechanics.

Overall, the environment feels so alive even in contrast to the original. It’s just so amazingly immersive and I need to experience this magical piece of nostalgic art.

The release date is scheduled for New Years 2018. I have no idea what to do with myself until then.

Then System Shock 3 to be led by Warren Spector? O.O Brb going to invent a time machine to pass the time until that one releases because I can’t handle this shit right now.
Liked it? Take a second to support Odins Musings on Patreon!