This week has not been the most fruitful in terms of productivity, but let’s face it: it is now October. I want nothing more than to frolic in the crisp pungent air and roll around in the decay of nature as I hurl candy at unwitting citizens.

I did manage to emerge from my dank hermit hole and take a night trip to see a VNV Nation concert, and holy hell. I was not prepared.

Never have I been to an industrial concert (and there have been quite a few) that cracked my shell of awkwardness and social anxiety to a point where I actually felt like participating in the revelry.

Ronan is just an amazing showman, and just absolutely captivated the audience with this energy and warm feelings. It was an amazing experience. 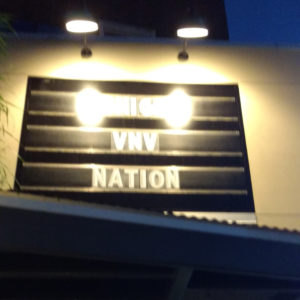 I also managed to snag a pretty stellar view from the balcony. 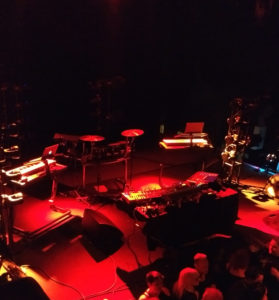 And brought a few things home with me. I already own four albums, including Empires, so I was excited to add on to my collection with the other album they performed that night.

I also picked up The Methuselah Tree from iVardensphere, who did supporting act. He did a fantastic improv show with his magical wizardy, and it was an awesome start to the night. I may do a more detailed review of the albums later when twelve demonic forces aren’t demanding my attention at the same time.

This show meant a lot to me. VNV Nation was one of the groups in my adolescence that struck so many chords with me, got me out of some troubling times. I was glad to be able to see them in person, and especially find such a spirited individual behind the music. Thank you.

And enough of that sappy shit I suppose. IT IS THE START OF OCTOBERWEEN. I made a trip to the local Michaels to purchase something I needed for a jewelry design on my YouTube channel. Keyword: someTHING. ONE. THING. But I suppose my spooky shelf needed updating: 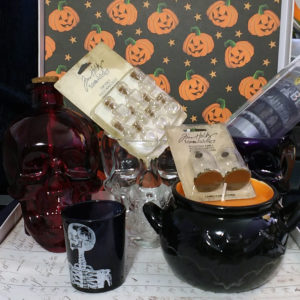 I will be futzing with that whenever I get the opportunity.

So on to the actual writing subject matter:

Not an impressive word count, BUT!

I know where things are going now. Everything is plotted and clicking into place, and in theory, I should have everything done by mid-week. Provided the spooks don’t get to me.

There is SO. MUCH. ACTION. in this chapter. It’s taking a toll on me. I have had to do some research to make sure that maneuvers performed are actually something plausible in the tenuous sense of reality that I possess. Thankfully it is, because I am not about to go figuring more shit out.

What I *think* I am going to do is, whenever I do finish 15, I will let it all sit and muddle in my brain. I’ll get working on the Octoberween videos on YouTube and the jewelry designs I have planned. When that’s finished, I’ll take on the entire piece one last time for content editing and enter with fresh eyes as I inevitably despise every single word that crosses my vision.

BUT THE END IS NEAR. Next on the agenda would be to send it to my editor, then figure out what the hell I am doing for a cover artist. The art by itself will be the most vital asset that will be holding back the completion of the project. I have a very particular style in mind, and that style is not cheap, unfortunately.

So in the meantime, feel free to poke around the website while I get into other machinations, share the word around, and perhaps together we can make this happen. For realsies.

I hope you all have a fantastical spooktacular season that is only as scary as your comfort zone allows.