Quick Book Update for those who are interested: The manuscript is now out of my hands and in the power of my Editor. I should see it again sometime in January, then after a week or two of more edits, it should be good to go to final formatting. Cover art is pending as well, I should hopefully see that by the end of this month, so stay tuned~

And now I am in this weird phase of not knowing what to do with myself, so I tried this thing called “relaxing” and dusted off my Steam Library. I had forgotten about this little gem called Shadwen, and I was immediately drawn to it because of the protagonist:

And I am absolutely delighted to report that the story did not disappoint.

This game was made by the studio Frozenbyte from Finland, and according to their description:

Shadwen is a stealth game where the only rule is to remain unseen. Stay hidden – or the ruthless guards will kill you on sight!

Shadwen, an assassin on a quest to kill the king, has a chance encounter with an orphaned girl, Lily. She follows Shadwen on her dangerous journey, but when the ruthless guards get too close, Shadwen must take action right in front of Lily’s eyes. Will Shadwen risk the girl’s budding trust by resorting to violence, or try and find another way while keeping her real purpose concealed?

To kill or not to kill – that is the question.

Now this game is categorized as a stealth-action game (And you all know how much I love my stealth-action games), but to be honest, I would categorize this more of a puzzler instead.  The flow of gameplay is very rigid and choppy, as well as incredibly self-contained within each checkpoint. This feeling was amplified by the jagged animations, which impacted the flow of the environment.

It’s kind of Thief-ish blended with Super Hot and Braid.

I found the difficulty settings interesting, not a traditional easy-medium-hard in terms of AI awareness that you see in most stealth games, but more like options that you can enable/disable. I thought this was a smart idea to cut back on AI programming. 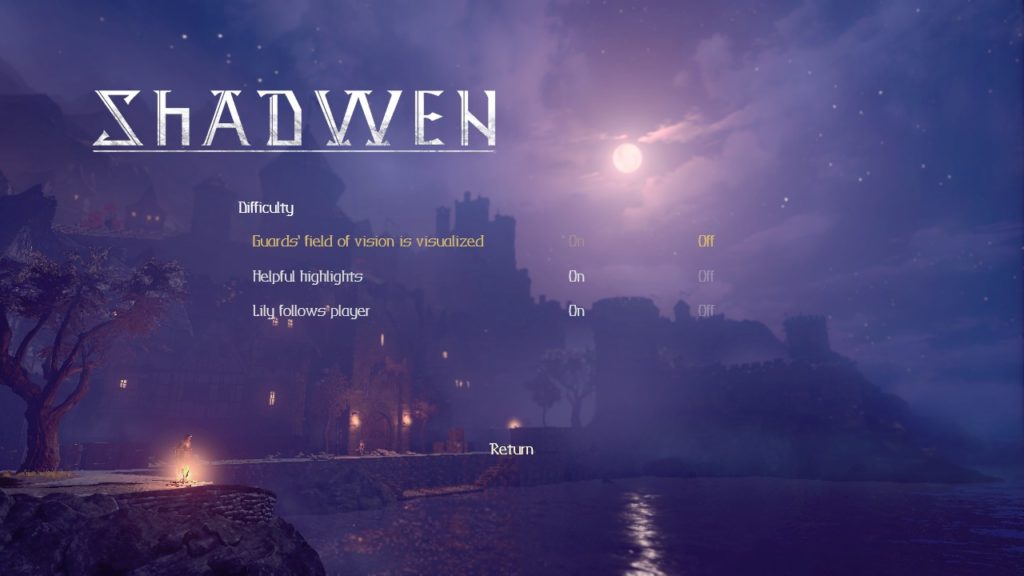 I do have qualms about the mechanics and AI of the game. While this is an indie studio, the core of the gameplay in this genre is heavily focused on performance of AI, and I felt they were not as tight as they could have been.

Guards clustered in one area after you made a noise and they tangled in each other frequently, which disrupted the flow of the playthrough, and prolonged your wait for an opportunity to move. They weren’t very coordinated when it came to their awareness checks.

I did enjoy the dialog an interaction between an alerted guard and a nearby guard. When a guard was alerted to a sound, they would “talk” to someone  who didn’t witness the account, and the second individual would reply with something along the lines of “the fuck you smokin’?” That was a nice detail.

I have spent a LOT of time getting frustrated at the grappling hook for a myriad of reasons from not being able to mantle outcroppings because the rope landed in the MIDDLE of the beam instead of the edge, or not being able to pull obstacles in the direction I wanted unless I back off and fall off my perch.  You have the ability to wind up the rope, but you can’t pull an object with it. (I’ve tried. Many times.) It also isn’t very clear what the range of the hook is, so when you are sitting high above the map, there isn’t any object for you to utilize and distract the guards.

There were decoy items that can be crafted, but frankly I never bothered with them. Materials were so sparsely scattered through the map, and unless  you dug through EVERY inch of the arena, items were very difficult to replenish. I think in my adventures I had a total of TWO decoys for the ENTIRE game.

I got through the whole game without using a single item. This was mostly because I was going the nonlethal route, though I still felt like I was missing out on half the game. I did try to use traps on a lethal run, but sounding an alarm is a game over condition, and it is very difficult to find an appropriate use of them without screwing yourself over trying to hide bodies before the entire map goes looking for you.

On the subject of screwing yourself over, I found the way the game handled save states interesting. There are checkpoints, which can be loaded from the main menu, but there is also the constant ability to rewind time. 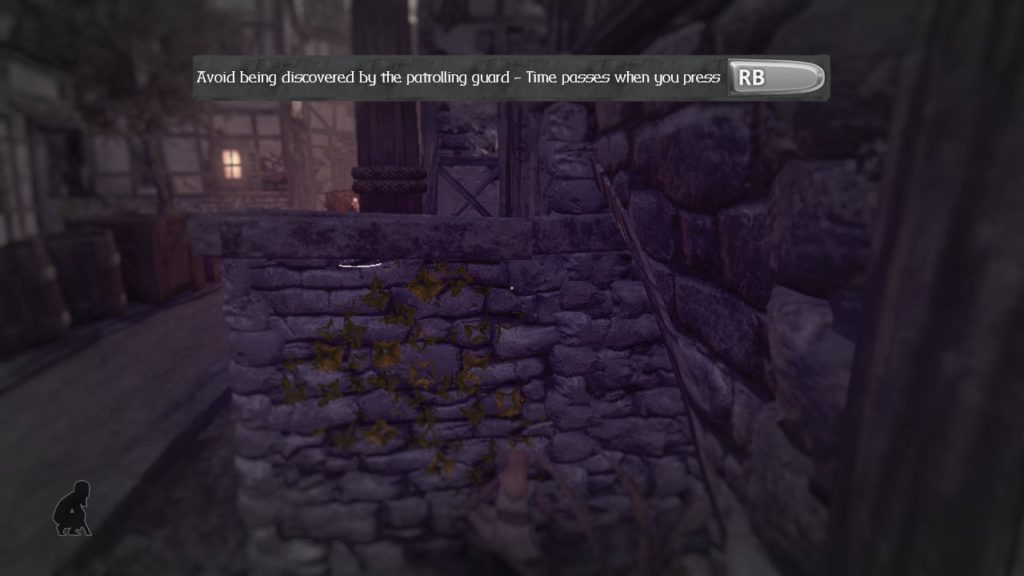 Time is also paused until you make an action, which took me a bit to get used to. It stops in the middle of jumping, leaving you re-enacting the Matrix in your medieval fantasy environment.

Lily’s behavior was a little frustrating as well. You could tell there was a “reset” state anytime a guard turned around. So you would spend ten to fifteen minutes setting up an opportunity for her to go, after about 85% down the path you made for her, a guard would twitch, and send her right back to the start.

This game is absolutely charming. The art style is wonderful, Shadwen’s costume is SENSIBLE, and the soundtrack is absolutely endearing. I felt like I was in Skyrim, but not.

Despite it being a short game, there is a LOT of replayability. You have the lethal vs. nonlethal routes, when you finish the game there is “Escape Mode” which is the same levels, but you play them BACKWARDS, and there is also a level editor in the game which I have not played with, but I appreciate the extra touch.

You have no idea how many times I have said to myself “please don’t fuck the story up, no convoluted romances, no maternal instincts kicking in, PLEASE.”

And I was SO. RELIEVED. Shadwen is an assassin sent to kill the king. That’s it. Nothing more complicated. Depending on which ending you chose, she hangs around with Lily, but more of like sisters or besties trying to survive in a shitty world. I APPRECIATE THAT SO MUCH YOU GUYS HAVE NO IDEA.

There is some sort of backstory that had been lost in transit, you collect pieces of it from guards, and the interaction with the king implied some history. However, the player did not receive the whole picture (or, at least *I* didn’t anyways). But you know what? You didn’t need to. It gave the player a snapshot of a reality without going into unnecessary details.

Overall this is a charming game and despite its technical mishaps, I highly encourage you to try as well:

Now, what the fuck do I do with myself?

I suppose there’s Styx: Master of Shadows.…or that mountain of holiday gifts I’m supposed to be making…

In any case, I hope your season is calm and collected. If you’re bored and want to check out some other ramblings, feel free to take a look at the Blog, or even peruse excerpts of Sleepless Flame.