We all know me and my love for stealth action games. And for hyperfuturistic games. So I poked around the Steam sales looking for MORE, and I happened upon this fascinating work called ECHO from UltraUltra, which is a Denmark based indie studio formed by veterans of the Hitman series, and not unfamiliar to the genre.

Guess what guys, I have MORE FEELINGS. This is certainly a unique experience that I would recommend to others, but there were a few small hangups that I found conflicting with my play.

First impressions, the unorthodox menu system performed in a way that I found a little obstructive, requiring experimental pokes and prods in order to determine how to achieve my intent. Upon entering the main menu for the first time, I was staring and an eyeball for probably about ten minutes, minutes that I will never get back, trying to determine of it was a loading screen or not.

When you get to the pause menu, the first option is “Function,” and I have no idea what that is supposed to mean. At first, I thought it was just a header that told me I was in the menu, but after selecting the option, I discovered is was just a journal with all the tool tips and tutorials that I had previously encountered.  Now this could be a localization/translation issue, which is totally understandable, but the entire interface seems a bit  haphazardly put together. 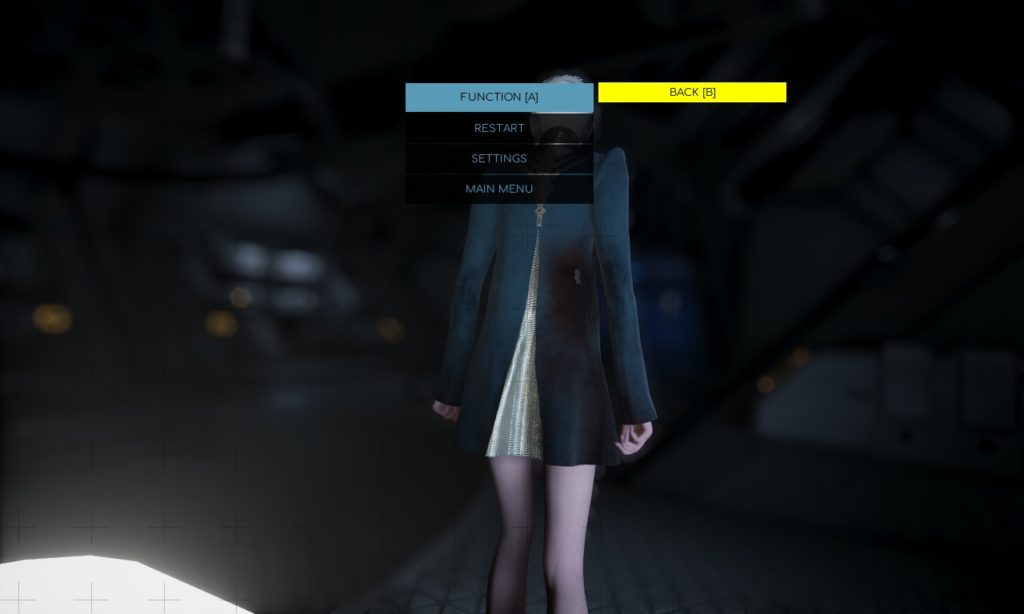 I realize this is a nitpicky thing to complain about, but I was stumbling around for a considerable amount of time trying to get my bearings after first opening the game. Interface is one of those things that is crucial to user experience, and I felt disoriented navigating through the menu system. Balance between aesthetic and functionality is crucial with any game.

Moving on to the meat of the gameplay: the AI interaction. At first, I thought everything was scripted, since the mechanics were introduced in a systematic flow that coincided with the way the player progresses. But after reading a Kotaku article on the development, I was fascinated to learn how much thought was put into the encounters. They addressed the trials of machine learning that still gave the player the chance to overcome obstacles. Forcing enemies to un-learn what was previously taught to let the player become the active participant in formulating the difficulty level. It was a strategy experiment as well as a game.

But on that note, I am still having trouble defining the scale of difficulty. I cannot tell if I had trouble in certain levels simply because of my impatience, or because of the swarming mechanics of the AI.

The beginning of the game was appropriately challenging with fantastic pacing that was just difficult enough. But towards the end, there was a drastic spike when new elements were introduced (it is a spoiler to get into specifics, sadly). I nearly ragequit on two levels, but the only thing that kept me going was the knowledge that those were the last two levels.

Since I knew everything would learn eventually, I gave up on using all mechanics built into the game and went with the “Strategically-run-around-in-circles-screaming-like-a-headless-chicken-with-a-head” tactic. I just bum rushed any and all checkpoints, which, while effective, I feel like I missed out on a lot of the game. And I obviously did not get even a fraction of the collectibles around the map. There were supposedly a lot of unlockables too, but I was too stressed to even attempt to go for them.

With that being said, it is very difficult to pinpoint where exactly Echo fits on the genre spectrum. The level design is not tailored for a full on stealth game, but the resource management and swarming tactics of the AI forbid the player from simply mowing down everything in your path. It’s simply easier to get caught and die rather than escape and reset, which can be frustrating, especially when the game has a checkpoint save system and you’ve spent a good twenty minutes getting to a point where you are.

There are “manual” save arches you walk through to maintain your  progress, but I don’t know if those arches were on every level, and I certainly was never in a position to explore and find out.

There are also a lot of heated arguments on Steam regarding the balance and genre of the game, but let’s not beat up that hornet’s nest.

Let’s talk a little level design: breathtakingly beautiful in a hyperfuturistic Art-Deco style, but HUGE. I am honestly wondering how my machine was able to handle the environments, though my tower did want to launch into space a few times. While the scale of the world imparted the magnificence of the structure, I found it excessive. I am a player that likes to explore every corner of the map in order to find secrets etc, but I learned quickly that there was no point to do so, and felt like I was being lead through a forced liner path.  Some of the maps were so large that I had almost thought it was a Silent Hill PT clone, and even turned back for a while to see if anything happened. In addition, the narrative was halted at this point, so I was left wondering where my objectives were.

But with that being said, pacing and flow was exceptional. It wasn’t all fast-paced-action-oh-gods-help-me-im-going-to-die-at-every-turn. Levels were broken up into digestible chunks that let you take a breath, and introduce lore into the world.

Mechanics were introduced in a sequential flow that made the player adapt in a comfortable methodology. It wasn’t just the AI that was learning, the player learns at the same time about the shifting environment. You also learn the patterns in the level chapters, what your objectives will be and what to look forward to. There is a heavy focus on planning and tactics, and it forced you to be patient with your actions before the world you live in crumbles into dust.

A few factors were picked out of “traditional” stealth mechanics as well to streamline the experience. Sight appeared to be the only sense that mattered, unless you intentionally triggered a noise (like yelling or tossing a glass orb across the hallway.) You could thunder your way around the scenery and the bots would ignore you. I appreciate this, because I think that would have dramatically heightened the difficulty level.

I also enjoyed how they handled the compass and the enemy sonar. It was intuitive, and my learning style quickly adapted to its use. The color coded alerts made it easy for me to decide when and where to act without having to spin the camera around constantly. It was a thoughtful solution to a disadvantage of third person perspective.

I really appreciated the writing and narrative of the game. While nothing groundbreaking, the story was present enough that it didn’t feel like the whole game was just a tech demo with some story elements sprinkled on top as an afterthought. The dialogue was well done and not stagnant, the characters felt believable.

At the beginning of the game, the player was thrown in the middle of a plot with no context, a snapshot or a movie that was playing that you just decided to sit down in front of. The story unfolded as you progressed through the world, and made more sense as you continued. The ending I personally found a little foggy, but I doubt I will revisit to gain clarity. I just appreciated it for what it was.

I do have to make a comment on the character design. It toes a little past an oversexualized line that I’m just not a fan of.  It’s hard to take the character seriously as three dimensional with the skin-tight suits and aggressive hip swing animations, and these effects made the Echoes appear more doll-like than a living part of the environment. I’m not going to get any further in this but…can we just stop?

There were a few other tidbits that I found in the game that shattered my suspension of disbelief and I thought may have required a bit more polish. Forced pacing in some of the movements was jarring: the stair animations made En feel inanimate and clunky, as well as forcing me to slow down when narration was taking place (this is especially irritating as the aforementioned HUGE ENVIRONMENTS come into play.)

I have also had to restart a few levels because I had apparently got the timing juuuuuust right acting before a blackout took place on the level, and when I “awoke” I found myself in a jittery polygonal limbo between gilded worlds and my body stuck inside flooring. I really wish I recorded that, I wasn’t able to replicate it on command.

The Razr integration was a cute touch. I like how my mouse blacked out when the blackouts happened in the environment. Though, truthfully, I only noticed because I was using my controller…

Right. Have I covered everything? Nope. But I’m gonna stop here because I think ultimately, while I had a few complaints, this was a fascinating experience and an interesting take on gameplay. I would highly recommend trying it out, especially if you’re into strategy and action games. I look forward to seeing what the studio comes up with next.

Check out the blog for other interesting rants and ravings, and for those of you waiting on my book,  Sleepless Flame is coming in March. Stay tuned for an upcoming cover reveal!