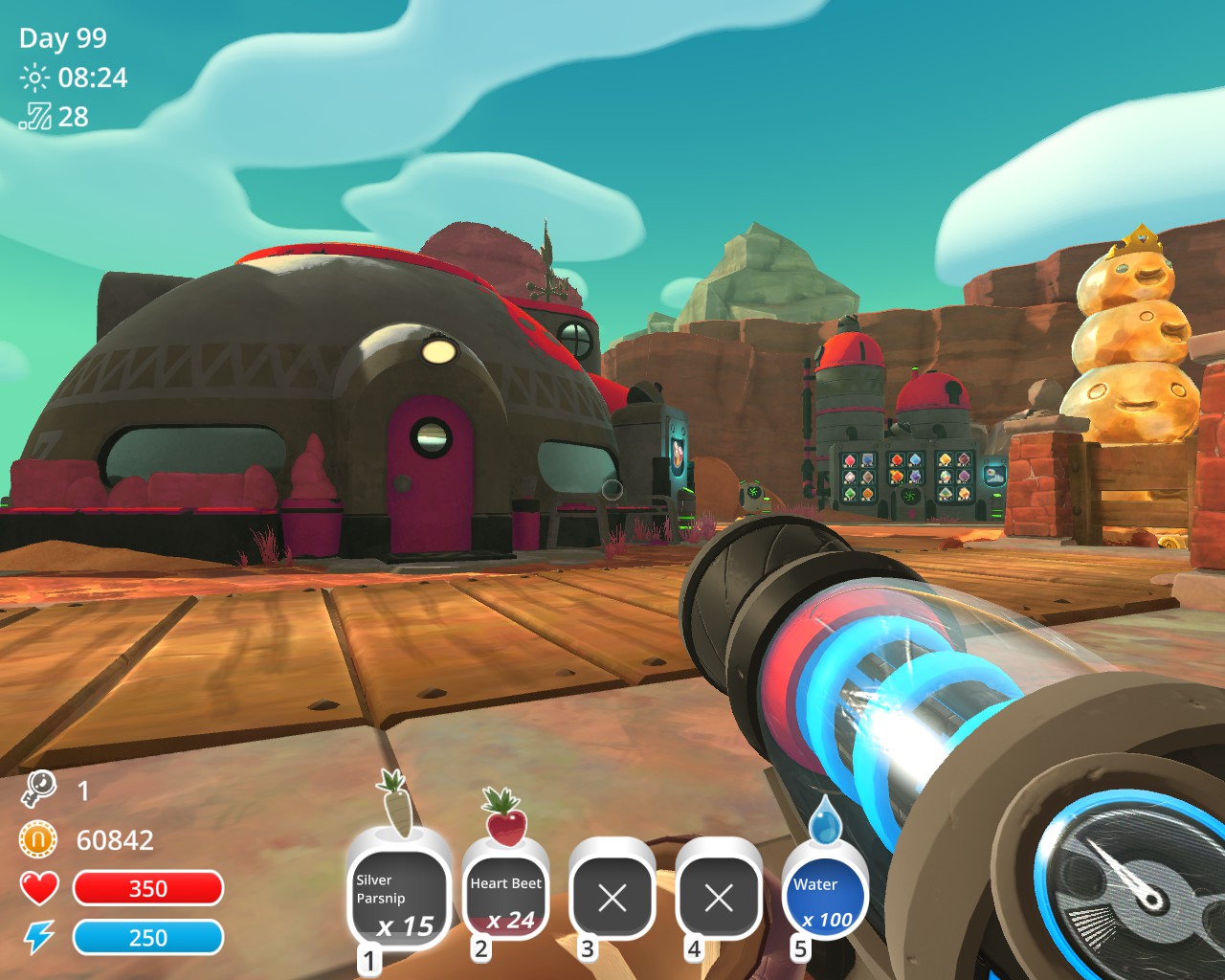 This game….where do I even *begin* with THIS GAME? I mean it’s not like I have a *problem* or anything- 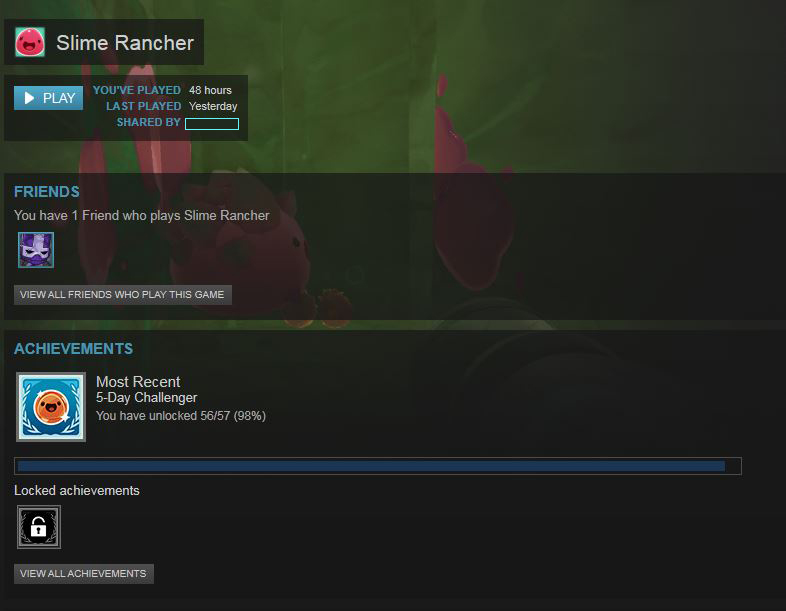 That last achievement though, I stg…I know *EXACTLY* what I am missing >:[

SO! The game of discussion today is the indie dev studio Monomi Park’s Slime Rancher. The premise is you have acquired a quaint little ranch out in Far Far Away, and you must obliterate your competition and take your place in the cutthroat empire of crystallized shit. I am only exaggerating a little bit, but I will have you guess about which part.

You go about the world discovering these teeny little slime creatures, then you feed them, then they shit. Then you sell the shit. Rinse and repeat, and enjoy the amazing scenery and story line while you are at it.

I saw a youtuber play this game and I NEEDED it in my collection. I bought the game on early access and I am just in love with everything around it.  Now that it is in full release, I can give you guys a good rundown. 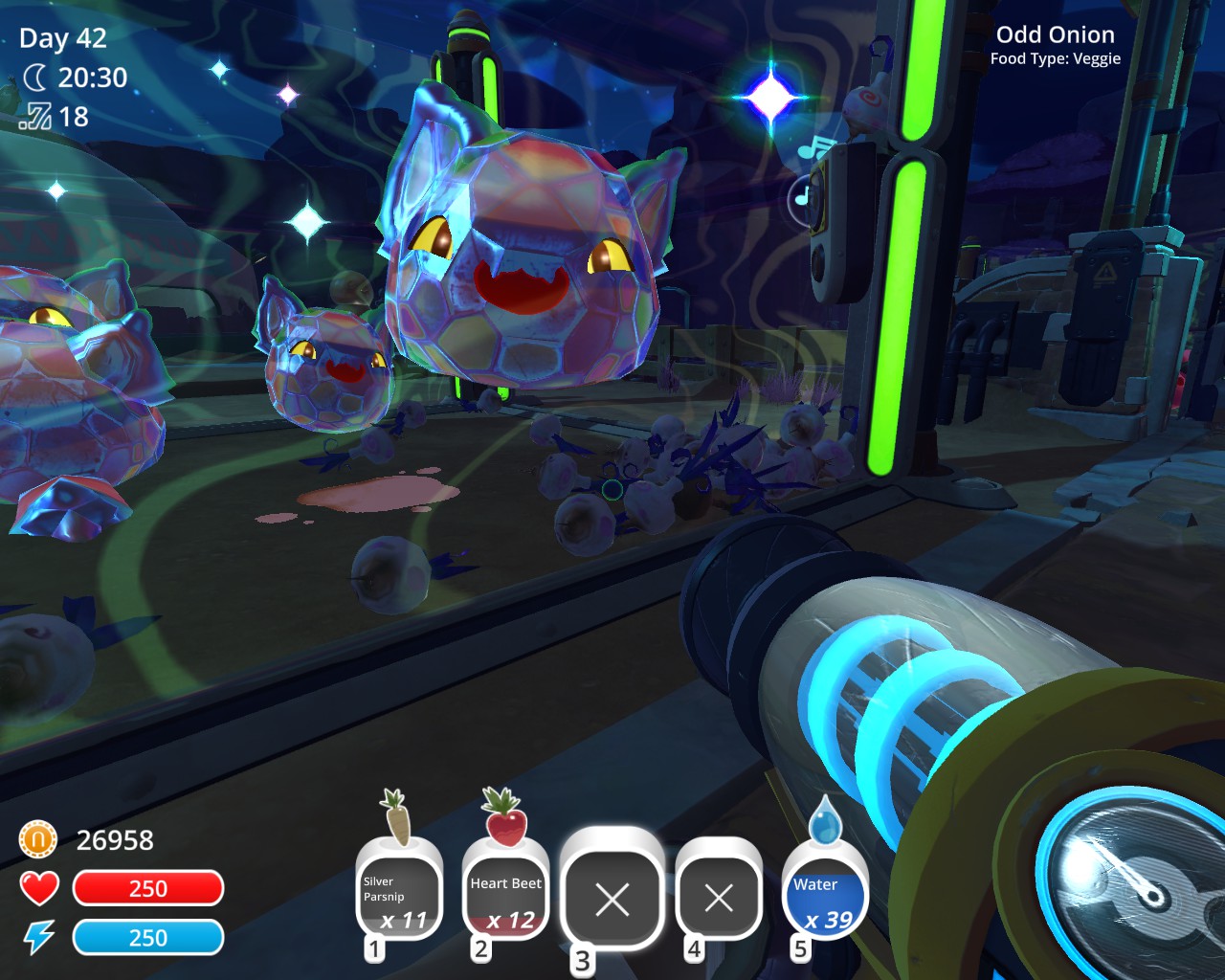 First, let’s talk about the art style, in all its amazing colorful glory. It’s so goddamned cheery that it is really hard to be in a bad mood, unless all hell has broken loose on your ranch due to circumstance.

I mean, LOOK AT THIS ADORABLE PROTAG!!! With her mint green hair and “Can-Do!” attitude! You conquer that world of slime! 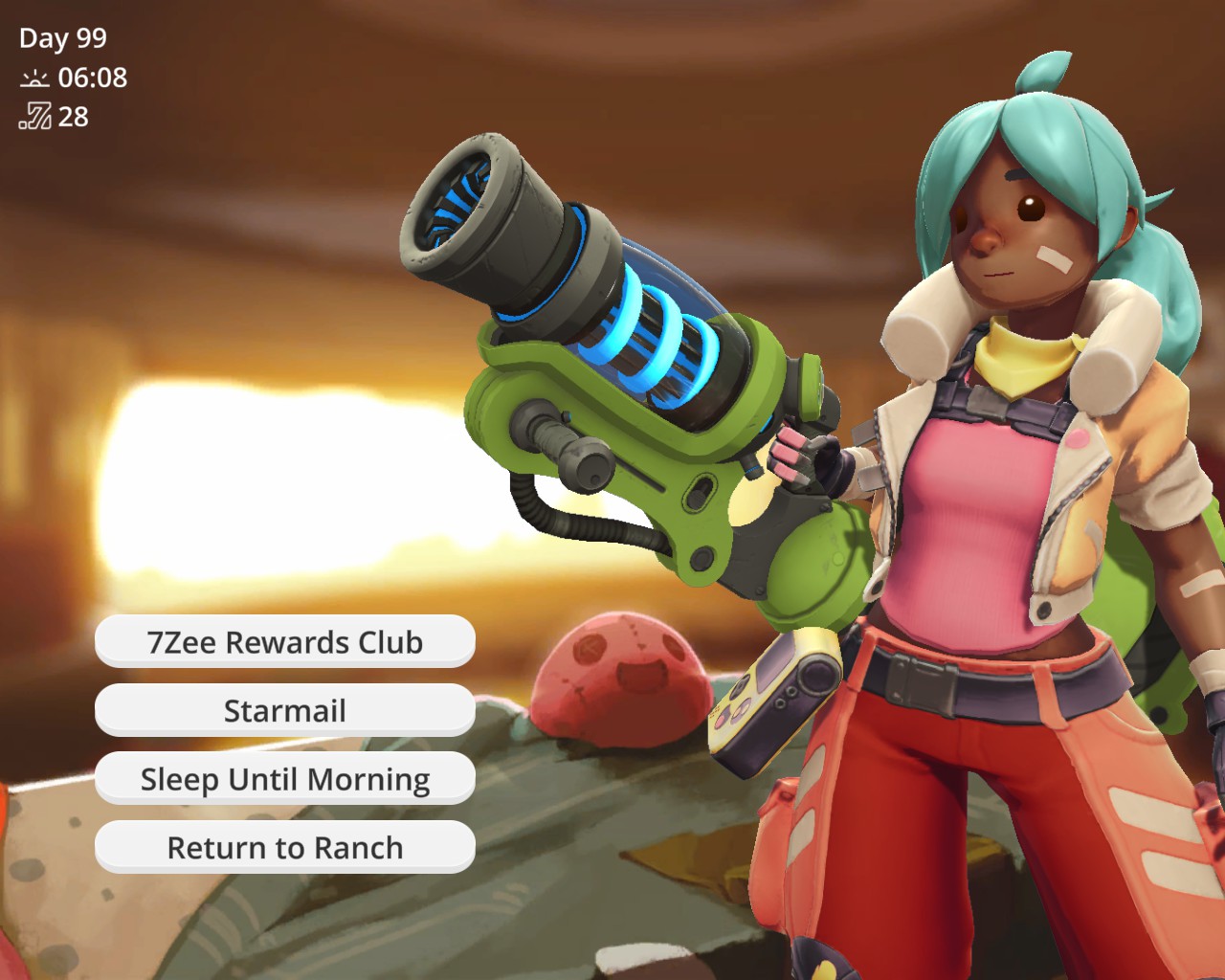 AND THE STORY! The story line had the audacity to chip off a layer of ice from my desiccated diminutive black heart. HOWDARE!

I enjoyed how the story was executed, even without the use of voice acting. The notes were scattered about the planet, but they were written in very succinct, digestible pieces that didn’t overwhelm the reader, and they were seasoned with enough intrigue that left you wanting to know more.

Alright, so let’s break down some gameplay.

Overall, it is a very open world set-your-own-pace kind of structure, and it is probably one of the best interactive stress relievers I can think of. The mechanics are simple for any audience, including filthy casuals like me, to pick up, but not to a point where the most leet of gamers won’t find it entertaining.

With that being said, I do think some additional tinkering can be done to tailor game progression as a whole.

Until I got into a flow of things and obtained most of the resources I needed, I have found it very difficult to leave the ranch for an extended period of time to explore the world, which is one of the points that the story emphasizes on. The level design is STUNNING, with all sorts of nooks and crannies for you to delve into and find lovely little perks. The unique biomes are seamlessly connected, and makes a beautiful world come alive.

But because of this, I have found my self at a point where a lot of the resources and slime science devices become irrelevant because I am farming for resources to *get* the devices, but after I finally do get the device, I no longer need to farm for the resources anymore. It’s this weird cyclical, almost catch-22 like balance that lacks a bit of “bulk” to it.

By the time I claimed enough resources to make one piece of technology, I was already wayyyyyy beyond the need for it, either because I have earned a better version, or I am just drowning in resources that a better method of extracting resources was redundant.

This is especially pertinent to warp technology. The map is vast and navigating through can be tedious, but the portal technology requires quite a bit of uncommon resources to get. By the time you have the ability to make them, you tend to have collected everything you have needed elsewhere on the way, making the venture superfluous.

In my opinion, warp technology is something that you would find the most useful at an early game time period. But early game, you have a very difficult time collecting monetary resources, especially if you don’t know what you are doing. It takes a lot to scrape together that first 10k to open up the science lab, then figure out how to use the extractors to collect materials required for warps, if you have any blueprints in the first place.

By the time you have everything figured out, you probably have gone over the map in extreme detail and figured out the best way to collect everything you need anyways, and are probably buried in enough money and shit to fill twelve scrooge vaults.

BUT needless to say, these hiccups did not hamper my enjoyment of the game. It just made it seem more like a chore list rather than a gaming experience.

And, this is only version 1.0 of the game. I have seen some awesome sneaky things hinted on the wiki for version 1.2, which I am anticipating with eagerness.

While we are on that subject, I do have a few nitpicky things that I would love to see addressed in a future update:

Currently, the autofeeders have an adjustable speed setting for you to control how fast food is delivered to the corrals. No matter how many of the lil shits I crammed in there, I really had no use for any speed other than slow.

Then it got to the point where I didn’t need to have many largos inside (currently I have only ONE per pen, because my science lab is full and I just need enough to top off my supply) And even the slow setting is overkill, leaving a lot of food wastage to come back to after long expeditions. I have taken to cleaning up the pens and shoving the food back inside. 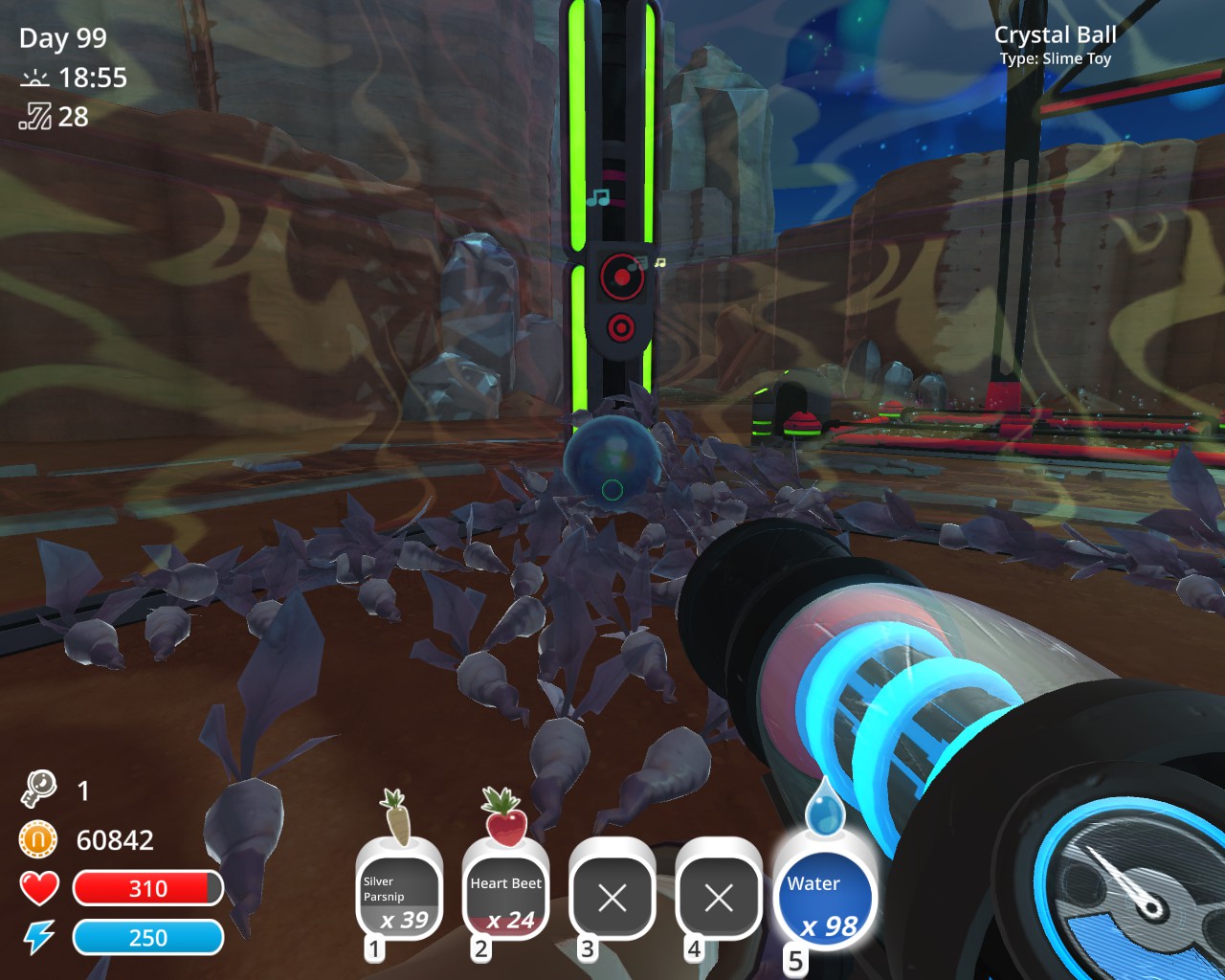 I mean, this is a little ridiculous.

What would be a nice feature is if you could adjust the rate based on how many slimes/largos you have sitting inside the corral.

This is a really nitpicky criticism, but sometime the slime toys block the plot collectors, inhibiting the succ. The only problems I have had are with the boxy shaped ones, however, like the Rubik’s Cube and the Power Cell for the Rads. The toys are also immune to the air burst function, so it’s a little annoying to push them out of the way to unblock the pipe, especially if you are inside a pen with dangerous slimes. Again not a huge issue, just irritating.

But other than that, this is just an amazing, well thought out and put together game, and I eagerly await the next versions, as well as other games the studio has plans for in the future. 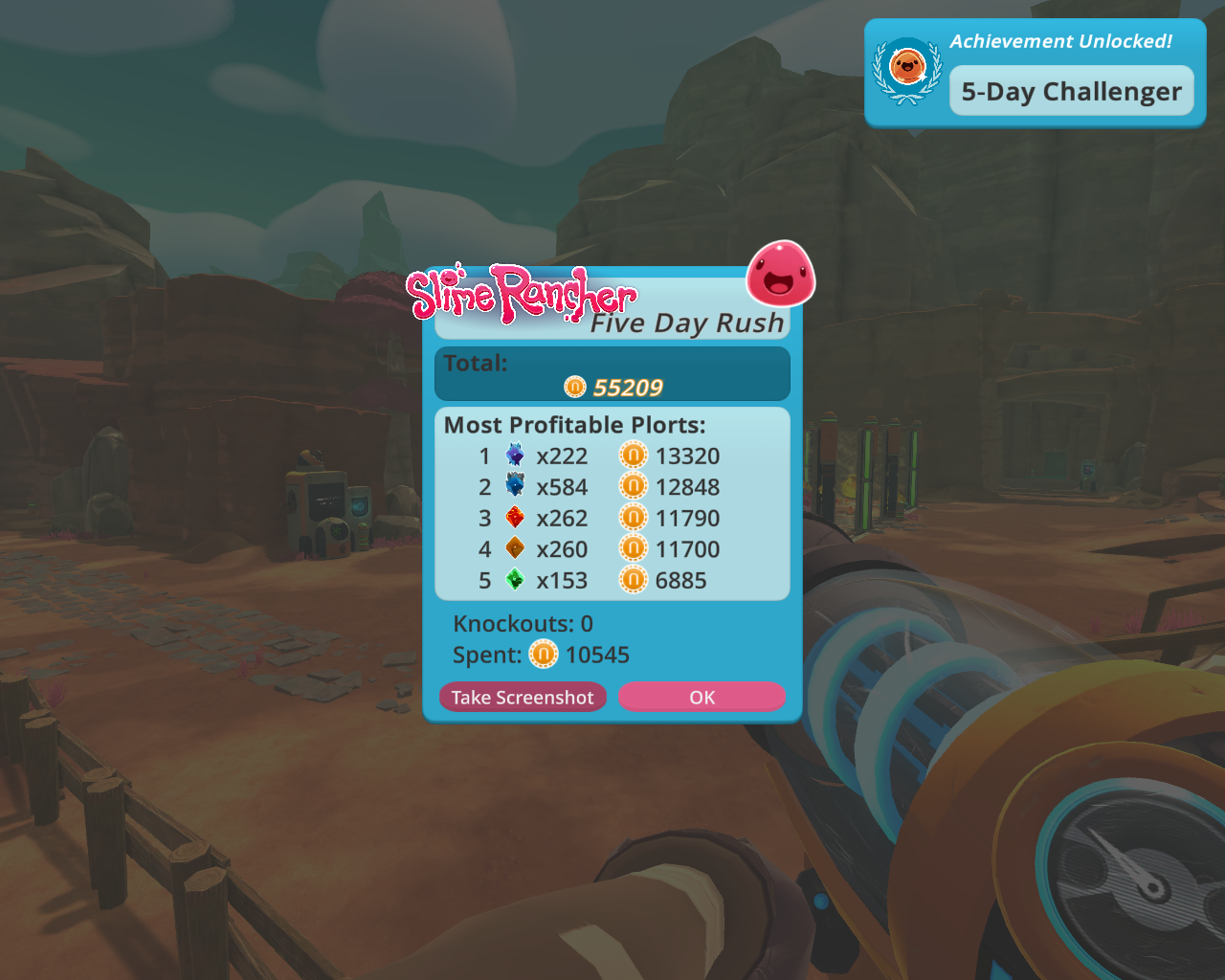 I got nothing left to do T-T I even did 5-day rush mode for the cheevos.

I also did a ranch tour on my YouTube channel for those who are curious about how I set everything up. Yes it will contain spoliers, to a point. Not story wise, but if you want the whole experience to be a surprise, I’d recommend watching later AFTER the initial gush-storm has subsided.

But here is a teeny teaser of my setup:

But yes! That is my impression of this beyond charming little game. I HIGHLY suggest you purchase it, unless you don’t have hours to spend in a magical little world.

I will leave you with that, and I must go and work on the next chapter of Sleepless Flame, because after the cliffhanger I left my Beta readers on, I have been receiving death threats, so I should probably finish…

Be sure to check out my excerpts for more info on that, or perchance pre-order a copy of your own.